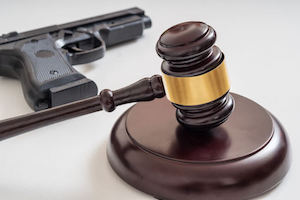 Gun charges in Michigan are common and serious. There are many defenses available and many of the laws require specific knowledge of legal defenses. This is why it's important to hire a criminal defense attorney who has worked on many gun charges and is willing to fight for you in court.

There are many types of firearms charges. Below are a few of the most common that we clients charged with.

It's illegal to carry a firearm that is hidden (unless you have a concealed pistol license). Concealment means the firearm is carried in a way that it is not easily seen by those come into contact with you. Complete invisibility of the firearm is not required.

For example, a person cannot have a weapon tucked into their belt with a shirt over the gun. This would be concealed. On the flip side, a person in most places is allowed to walk around with a firearm so long as the weapon can be seen. So I can walk down the street with a gun at my side, I just can't walk down the street with it hidden in my jacket.

Carrying a concealed weapon is one of the most common type of firearm charges our firearm defense lawyers see at ArborYpsi Law. In a sense, it's like driving without a driver's license. It's very easy for a person to do although the person had no nefarious intent whatsoever in having possession of the weapon, which is otherwise legal to possess. Unfortunately this criminalization of the behavior has serious consequences.

What is Carrying a Concealed Weapon in a Vehicle?

Carrying a concealed weapon in a vehicle is commonly charged as well.

A felony-firearm conviction is a mandatory two years in prison, with no exceptions. This makes the felony-firearm charge one of the most serious common charges to defend. Learn More About Felony-Firearm.

What is Felony in Possession of a Firearm?

In general, a person previously convicted of a felony may not possess a firearm. An exception would where a sufficient amount of time has passed since the felony conviction or the person has gone through a gun rights restoration in circuit court. Specifics on Felon in Possession of a Firearm.

Possession of a Firearm While Intoxicated

Just as it's illegal to operate while intoxicated, it's also against the law to possess a firearm while intoxicated. A person cannot possess a firearm if they have a blood alcohol content of over .08 or if they are visibly impaired by alcohol. There are some overlaps between DUI law (as it relates to alcohol consumption, impairment, and blood alcohol level) and defense of these laws. At ArborYspi Law, we are skilled in DUI defense and can bring these skills to bear for defense of this charge. More on Possession of a Firearm While Intoxicated.

Will I Lose my CPL if I'm Convicted of a Crime Involving Guns or Firearms?

Almost every criminal conviction will result in either a suspension or ineligibility to have a concealed pistol license. A felony will lead to a complete loss of a CPL. The majority of misdemeanors result in a period of suspension that will last either 3 or 8 years, depending on the type of misdemeanor.

Many people charged with a crime are concerned about the effect on their CPL. Even a driving on a suspended license will lead to a CPL suspension. Losing a CPL is a collateral consequence of most convictions.

Often gun charges will overlap and combine. For example, a person could be charged with both carrying a concealed weapon and felon in possession of a firearm. The consequences can be severe, and you need a strong lawyer to present your best defense option.

Don't hesitate to call us for help. Sam Bernstein is an Ann Arbor criminal defense lawyer, and our firm has represented clients against charges for all types of firearms offenses--in both trials and plea negotiations. We offer free initial consultations, so contact us today.

ArborYpsi Will Also Fight to Get Your Firearms Rights Back

If you have lost your gun rights it may be possible to get them back. An expungement or gun rights restoration. ArborYpsi Law is skilled in obtaining post-conviction relief to help responsible gun owners win back their rights.

More Gun Charges
Contact Us
Practice Areas
Client Reviews
★★★★★
Sam was a helpful lawyer who is a man of his word. He helped in our cases 2 times in a row with successful outcomes. I could not think of a better lawyer who is always on time to court, good attitude, smart, and honest. He is respectful and answers all of the questions we had. Two cases were both a success thanks to Sam Gigi
★★★★★
It has been a couple of days since Sam represented my son in Washtenaw County. He gave me the miracle I prayed for. He did way more than I thought was possible and as I told him on the phone I would hug him if I could. If you ever need a good lawyer, this guy is the one to hire – and his prices are very very reasonable. I wish him much prosperity and a good life. He made my life happy for the first time in a long time and I cannot thank him enough. Linda
★★★★★
Sam took my call and consulted me immediately. He provided fair pricing for the legal services I was requiring. I hired him about a week before my case, he still took on the case load and did amazing work. He is an excellent attorney and a friendly person to be in the court room with when you’re in a stressful situation. Devon
View More Reviews
Submit a Law Firm Client Review